DING 2015: “Rev. John Watson was born in Lyme Handley, Ch. He went to school at Eccles, Wigan and Manchester. He graduated B.A. in 1745 and M.A. in 1748 from Oxford University. He was curate of Runcorn, Ch. and of Ardwick, Lan. in 1746. From 1750 to 1766 he lived in Halifax, as curate to Halifax, first, and to Rippondon, later.  Afterwards he continued his ministry in Lincolnshire and Cheshire.

Two letters in the Halifax dialect, published in issues 7 and 9 of The Union Journal or Halifax Advertiser are attributed to him. This was the first Halifax newspaper. It appeared under the patronage of Sir George Saville (1726-1784) (See further Crabtree: 146ff). It was edited by Rev. Watson.

He was also the author of The History and Antiquities of the Parish of Halifax (1775) which contains “Remarks on the Dialect of Halifax Parish” and "Vocabulary of Uncommon Words used in the Parish of Halifax. Both were reproduced almost verbatim in 1789 by William Bentley (1747-1811) who did not cite Rev. Watson as his source."

1775. "Remarks of the Dialect of Halifax Parish", "Vocabulary of Uncommon Words Used in Halifax Parish, with Conjectures about their derivations. The History and Antiquities of the Parish of Halifax, in Yorkshire. London:Printed for T. Lowndes: 529-548. SC. EDD.

NOT IN KINGKONG PROJECT

Crabtree, John. 1836. A Concise History of the Parish and Vicarage of Halifax, in the County of York. London: Simpkin, Marshall and Co.

Porrit, A. 1984. "The Society of Antiquaries and the Rev. John Watson MA, FSA". Transactions of the Halifax Antiquarian Society:  36–9 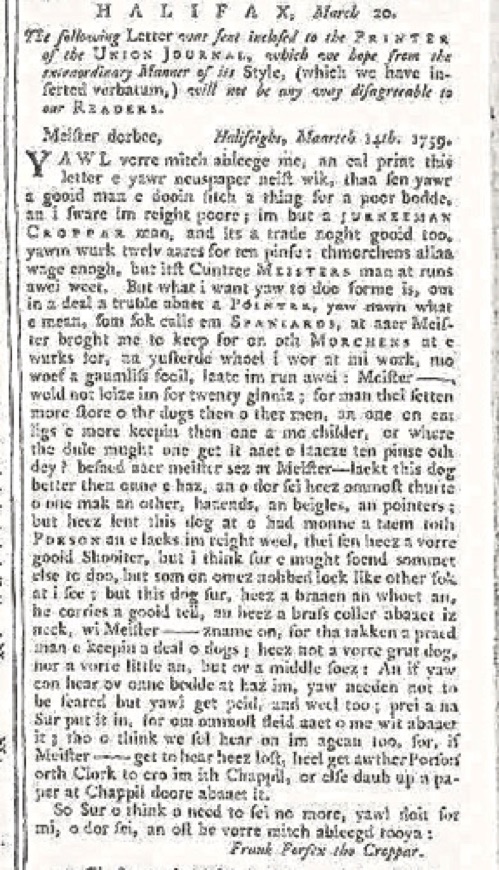