DING 2014: “Born at Draglow, Chapel-en-le-Frith, Db., he died at Ardwick, Manchester. He was buried in his birthplace, in the churchyard of St. Thomas Becket Church. He lived, at least since 1871, at Ardwick (Maidment 2014). He was a railway clerk by profession and a devoted dialectologist by vocation. He was a very active member of the English Dialect Society for which he both edited and wrote several glossaries. He did much fieldwork for Alexander John Ellis’s monumental On the Existing Phonology of English Dialects (1889).  Joseph Wright also acknowledged his help in the compilation of The English Dialect Dictionary (1898-1905). His notebooks and working papers were bequeathed to the Bodleian Library, Oxford. We want to express our gratitude to John Maidment for his generosity in sharing the information he has gathered on Thomas Hallam.”

NOT IN KINGKONG PROJECT

Maidment, John. fc. “Thomas Hallam: The Phonetician of the Peak.” 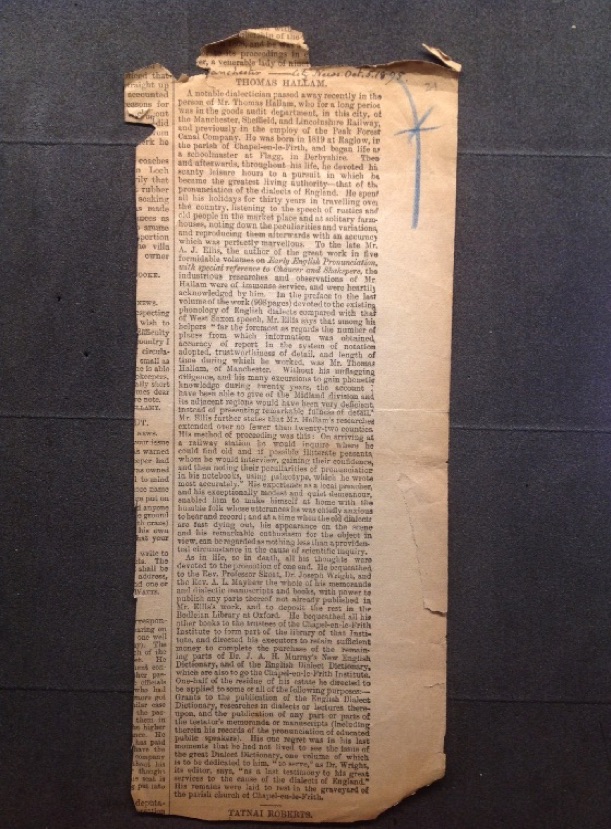